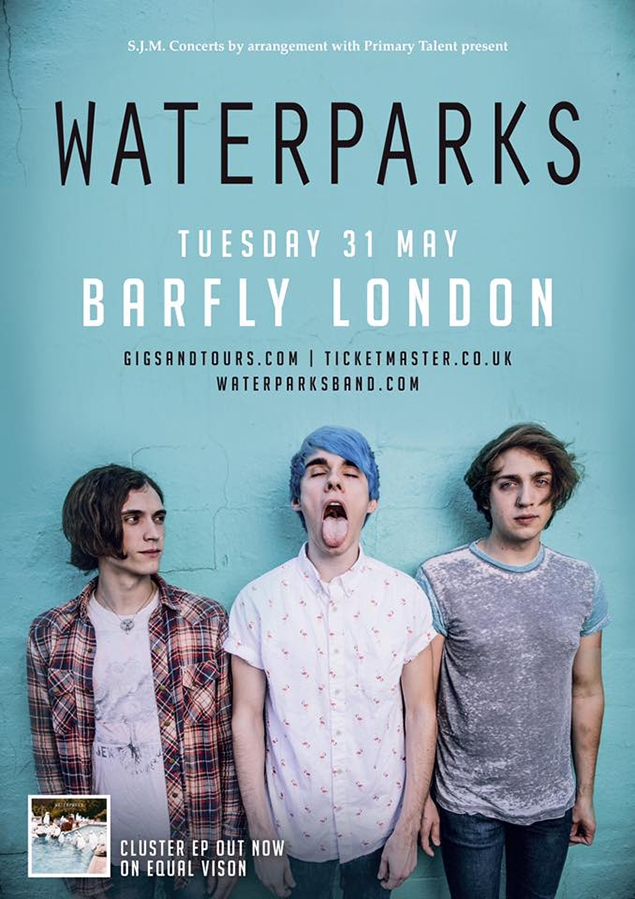 Last Tuesday marked a rather important date in the history of the American band Waterparks. The

band performed not only their first headline UK show, but their first headline show outside of their home state of Texas, in Camden’s Barfly and boy did they put on a good show. If you remember my blogpost from back in January when I first wrote about the band (read it here), you’ll know how much of a fan I was of their music and I can honestly say that live, they did not disappoint. The one off UK show marked the end of the bands first trip to the UK after performing on the Slam Dunk festival lineup at the weekend.

Supporting Waterparks at the London headline was Manchester based rock band Milestones. Although I hadn’t heard their material before, I was pleasantly surprised by their energy onstage and thoroughly enjoyed their short opening to the show. The band just announced they’re supporting Area 11 on their UK tour in July, so if you’re fans of good old guitar music I recommend you go because I think you’d really like this band.

Below is the video to their song “Nothing Left”, check it out and let me know what you think (I kinda love it!)

By the time Waterparks came on the crowd had doubled in size to what must have been near to the maximum capacity for the venue. They opened with, arguably one of their biggest tracks, Silver before continuing to sing a mixture of songs from their previous EP’s and their new EP Cluster which was released on Equal Vision Records earlier this year. The energy the band displayed onstage was undeniable along with their interaction with the crowd which, personally is my favourite thing about smaller capacity gigs. Both guitarists, Awsten Knight and Geoff Wigington were bounding around the stage and Otto Wood fiercely attacking the drum kit as the crowd lapped up their performance and chanted the lyrics back to them.

The expression on their faces during the second song in their set, “Crave”, demonstrated the effect of seeing a crowd chant back the lyrics at your first headline show in a country miles away from home. Even I felt an unusual sense of pride in watching them onstage after sharing their music around friends and online through this blog and Twitter – basically to anyone who would listen!

Seeing a band live after listening to their music for a while is the point at which you can see a true reflection of their musical abilities, and it would be an understatement to say that the Waterparks lads have some serious musical talent on top of memorable voices and powerful pop-punk lyrics which all adds to the band’s overall great sound.

The band closed the show with my personal favourite track of theirs, “I’m a Natural Blue” before staying around after the show for around 2 hours to hang out, chat and take pictures with fans. After getting to speak to them for a little while I can honestly say they are one of the nicest bands I have ever met.

Waterparks will be back in the UK in August for Reading & Leeds Festival band holiday weekend (which I will be attending so expect videos & blog posts from there) and who knows, maybe we’ll see the band do a UK/European tour sometime in the near future. But one things for sure, if they do I will definitely be there, and I would highly encourage anyone to go and see this incredible band live.

I did vlog the concert and the day leading up to it so I will leave that linked below if you want to see what I got up to on my first trip to Camden and live clips from both Waterparks and Milestones.

Where to find Waterparks;