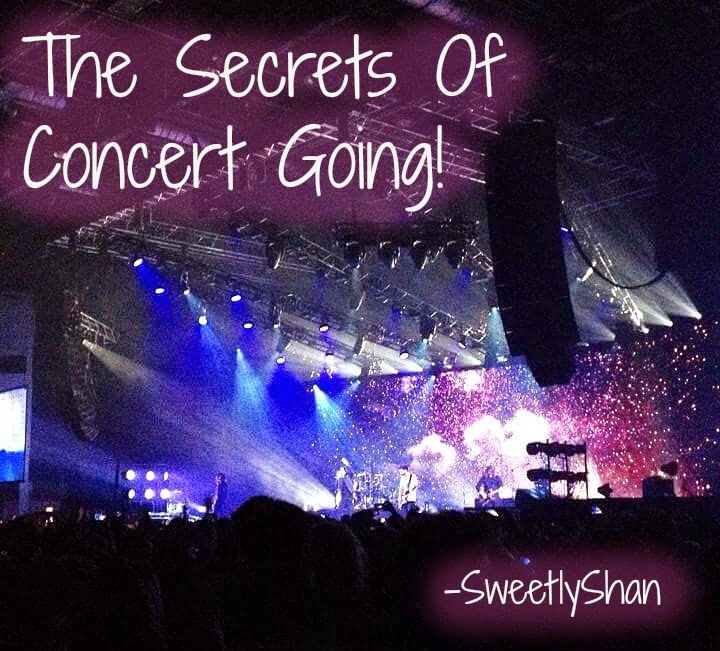 My “Shan’s gig guide” has been one of my post popular posts (read it here), and I always get alot of comments to make more posts like that one! So I thought I’d let you guys into some exclusive secrets of how to make a concert the best possible and without spending loads of money!

– Water is a hard one as most places don’t allow you to take food OR drink in! But I have (accidentally, I might add…) avoid having my water taken off me by having a jacket in my bag which covered it, so that when they search your bag the water is concealed. It sounds bad, but as long as you don’t plan on throwing bottles at the artists, it’s fine!

– A point A LOT of you seemed to agree with me on my past post was how much fun queuing is. But if you’re torn between queuing to get a place near the front (in standing concerts) and hovering by the stage door waiting for a chance to meet the band, then I have the solution- thank me later.

So if you’re going up for the day, presumably to queue, the trick is to take a carrier bag (possibly with food in to save you buying it) and if you want to make a sign/poster for the concert take that too. Then as soon as you get to the venue, sit down in the queue, and spread your stuff around you. In the past I’ve had a Starbucks then left the cup there to guard my spot, then throw the rubbish in the bin before going into the concert – we don’t want to litter! Then later when someone joins the queue behind you, you can tell them you’re just going to meet someone, or to get a drink or something, and loiter by the stage door until you feel like you want to go back into the queue. By making your face known to the people in-front and behind you, no one will think you’re pushing it, AND you get to go try and meet the artist! This is a good option if there’s only 2 or 3 of you as then no one will be left alone to hold your spot in the queue!

– Toilets. Now ladies, we all love to go check our appearance in the mirror, just to make sure our eyeliner is still on point and our eyebrows on FLEEK… but especially if you’re at a standing gig – GO TO THE TOILETS BEFORE THE CONCERT! Or you’ll lose your place in the crowd. If you’re seated, the trick is to go just before the interval, so before the support ends, that way you miss the queues and will make it back in time for the main act!

– If you haven’t already met the artist before the concert, or you didn’t have the chance to do the steps above, you can try after the concert. Most POP artists like to leave the venue before they open the doors to let the fans out, to avoid seeming rude when they don’t meet the hundreds of fans outside… But, the venue will only close its doors at the end of the last song, so if you leave before the last song finishes, you should make it out in time to catch the artist as they’re leaving! More rock type bands will usually go back to their dressing rooms to get changed and all that before they leave, so if you have to leave the gig as soon as it finishes (possibly for transport reasons), definitely try meeting the artists before hand.

– I also should probably say I find it really useful to know the set list for concerts, obviously if you’re the first date on the tour that will be hard, but if not try and search for it online! That way you know when to take your toilet breaks and when to leave before the ends!

– Security at concerts are usually pretty stern, but word of advice from someone who does this alot, be nice to them! If you’re nice to them, they’ll be nice to you! I often find some security guards are really funny guys, and if you’re nice enough if you ask them when the artist is leaving, or when they’re arriving, they’ll tell you! But only if you’re super cool and don’t scream like a fangirl when they tell you anything, they don’t want to be responsible for any valid information being spread to masses! BE COOL GUYS!

That’s pretty much all the exclusive tips and tricks I can think of  for today! I hope you enjoyed this post and be sure to tweet me @SweetlyShan if you try any of these out! Or even if you have some secrets of your own!

Also, I’m seeing The Vamps, Union J & The Tide in Cardiff next week, so expect a concert review up on that!

Thanks for reading guys!
-Shan