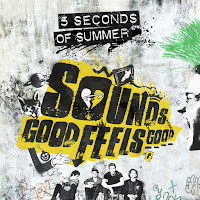 Just incase you haven’t already heard, 5 Seconds of Summer  have a new album out called Sounds Good Feels Good! So, naturally, I’m going to do an album review, and because you guys always seem to love these!

It’s not hard to see, or more hear, the diffences in this album compared to their first album. This album definitely has more of a pop punk vibe, rather than the pop yet we’re-trying-to-be-punk-rock feel the last one had! There are some really good upbeat, guitar heavy tracks which make you want to get up and moooove! As well as these up tempo songs, there are also some seriously emotional tracks, which when I first heard, gave me goosebumps! The Girl Who Cried Wolf being one of those songs I feel some people will really be able to relate to!

The co-writing of Good Charlotte’s Joel & Benji Madden can definitely be heard in some of the tracks, such as the first 3 tracks of the album, Money, Hey Everybody and the hit She’s Kinda Hot. And the Madden brothers aren’t the only pop-punk stars to have co-written on the album. The song Catch Fire was written by Clifford and Hemmings as well as the frontman & songwriter from the biggest pop-punk band around at present, All Time Low’s Alex Gaskarth.

For me, the most powerful song on the album is Broken Home, written by Hood, Hemmings, Clifford as well as The Madden brothers  and somewhat of a songwriting legend John Feldman. Its a song which you can tell has been written from the heart, and I think will become a favourite amongst the fans, similar to Therapy by All Time Low.

There are definitely some pop-punk favourites on this album that I have already had on repeat for a number of weeks, such as Fly Away, Jet Black Heart and Hey Everybody! As well as my favourite song they performed at the last tour, Permanent Vacation!

This album is one I imaine is going to make an incredible tour set, and If you guys didn’t know their tour, Sounds Live Feels Live, dates for the UK, Europe, Asia and USA went onsale/are going onside throughout this month! You can click on the link here to see a full list of tour dates and tickets! But be quick, once this album gets released everywhere I predict all these shows will sell out! Below is the tour poster with the UK dates! 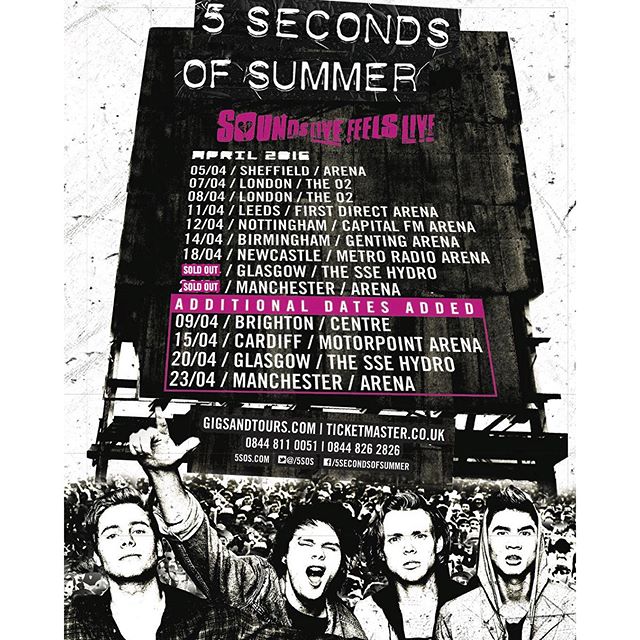 I will be attending both the Cardiff show and the 2nd night at London’s O2 arena next April, so if you would like to see a vlog of one of these, make sure you’re subscribed to my YouTube! (link at the end). You can also read my concert review on their last Rock Out With your Socks Out tour here!

The album is available now from most stores and on iTunes! I would recommend getting it, its daintily going to be my favourite album for the next month at least!

Thanks for reading guys, and leave YOUR favourite track on the album in the comments section below!

Where To Find 5 Seconds Of Summer;