So as many of you will know already, I went to see 5 Seconds of Summer in Cardiff on Sunday! Some of you will remember my posts from when I saw them for the second time way back in 2013, so this concert was my 4th time seeing them live!

I was contemplating vlogging the day (seeing as you guys seemed to like my The Vamps one!) but I’ll be honest, I forgot in the excitement of the day! Myself and friend Rhi spent the day up in Cardiff before the concert, and were lucky enough to see the support act, Hey Violet!, acoustic “hang out” outside the arena, which was basically where they played one song and took photos with everyone who wanted one. I’d only ever heard one song of theirs, and that was way back when 5SOS announced they had signed the band to their new record label, Hi or Hey Records. But I really liked the song they sang acoustic, and thoroughly enjoyed their set during the actual concert. The California band were very high energy, interacting with the crowd and clearly having an amazing time up on stage! I can honestly say I think they’ve gained a new fan with me, and well deserved because I thought they’re performance was very enjoyable and they definitely warmed up the crowd! Here’s the photo of me with Hey Violet! after the hangout! 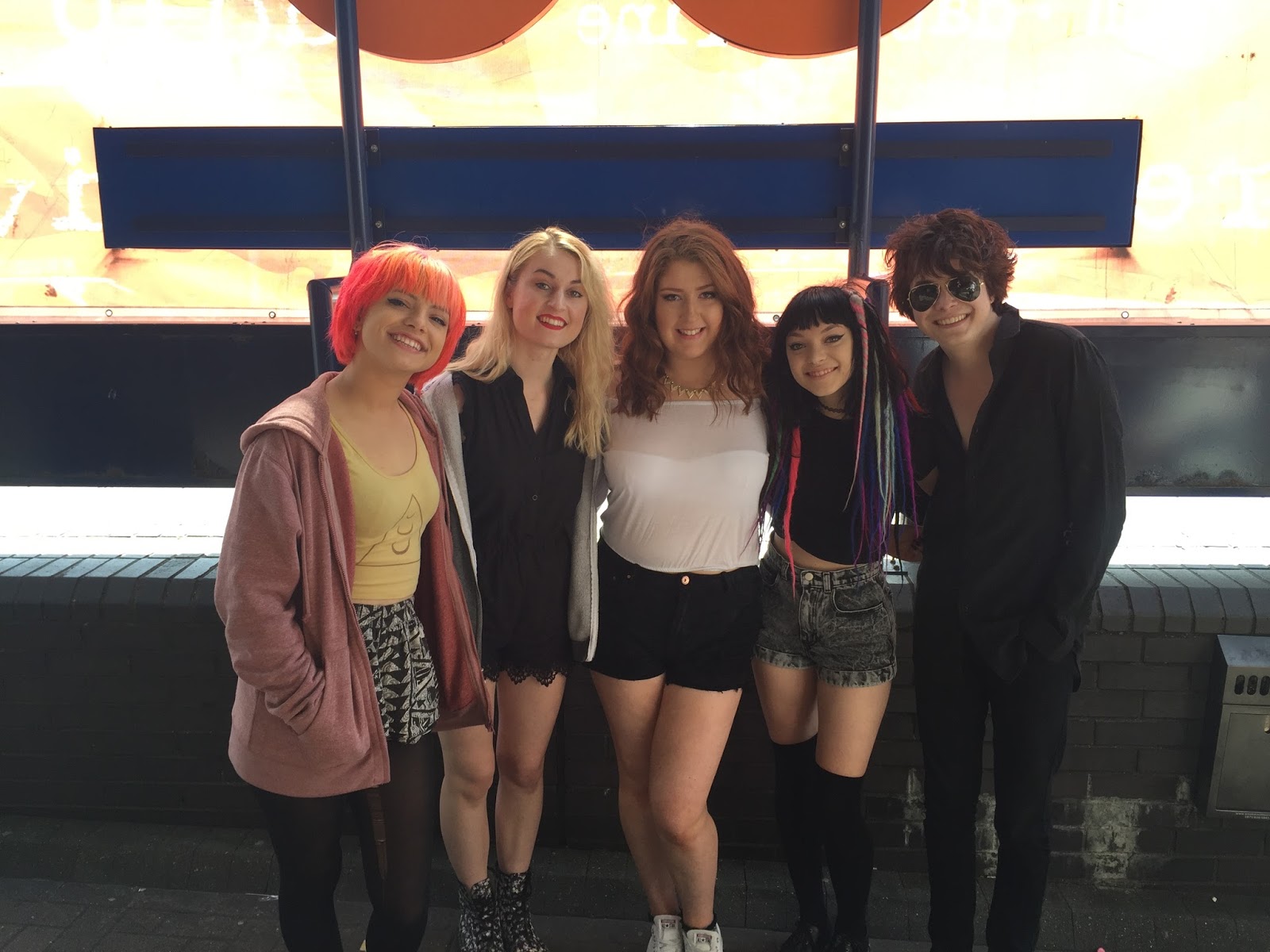 Check out the video for Hey Violet‘s song “This is Why” below (I’m sort of obsessed with it!)

The show itself did run around 30 minutes later than schedule, as a result of the lack of organisation from the arena around the tickets/wristbands for both standing pods, I was pod 1 for anyone wondering. It’s been over a year since 5SOS toured here, and the last time I saw them so the excitement for this show definitely had time to build up! I’d sort of forgotten how incredible they are live, and how much more I prefer their live music to that on their album/EPs, but that’s just my opinion.  So once the stage was set up, 5SOS came on, opening with the track ” End Up Here” from their album, then followed that up with some of their older songs that I hadn’t heard for years! Here’s the setlist for the tour; 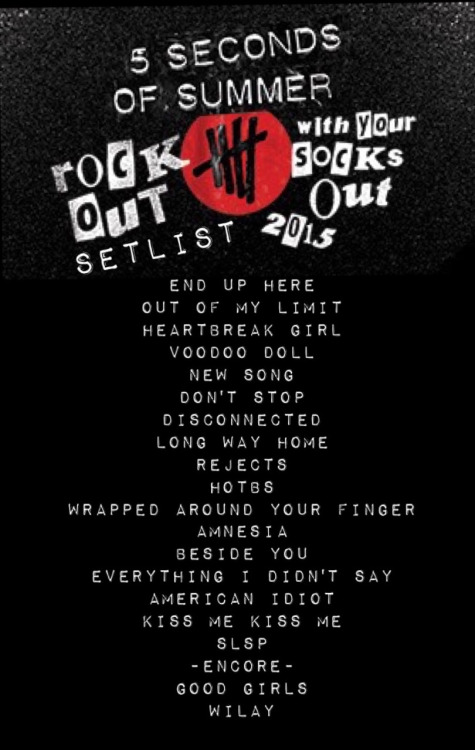 I’d heard most of the songs before, except some of the ones off their debut album, which I was really interested to hear live because, as I said, I always prefer this bands music live than studio tracks! My favourite song they sang was either“Rejects” or “Out of My Limit” because Rejects is such a fun song in general and the crowd seemed to love it (plus it was great to watch Michael rock out to that one!) and Out Of My Limit because it was the first song of theirs I ever heard live back in Cardiff in 2013 with One Direction and it’s amazing to see fans, even new ones, still sing every single word 2 years on! However, being a Green Day fan, I was really into their cover of “American Idiot” which the crowd also LOVED! The only new song they sang was “Permanent Vacation” which is actually an incredibly catchy song!

I was very impressed with 5SOS as usually I feel, as Cardiff is always the smallest date on the tour, most bands don’t make a fuss about Cardiff as they do with larger cities but this time I felt they really did try! Michael even changed the lyrics in Good Girls to “She’s Welsh and I think she’s fluent” which of course the crowd went mad for! I was 3rd row for the whole show, so during “Amnesia” I turned around to face the rest of the arena, and it was a beautiful sight, with lights up everywhere! The crowd was similar to what it always has been for this band, although the only difference this time was there were only 2 standing pods, the rest of the arena was seated, and with it being such a small arena there weren’t many in each pod! The crowd sang and danced the whole show through and I would have expected nothing else! As always, the bands interaction with the audience was amazing and
of course their overall performance was to a very high standard!The band made great use of the runway (it was a T stage setup)
interacting with fans each side of the arena, and each pod. Being on
Michael’s side of the stage, we saw more of him than anyone else, but I’m
not complaining as he is always an entertaining person to watch onstage!

Possibly
the best I’ve ever seen them, as it’s the headline biggest tour they’ve
ever done and I definitely felt they stepped it up a level!

I’ll insert some of them later on it the week (as they will take ages to upload with my slow wifi!) if you guys would like to see them! Or if you want to see some now you can go over to my Instagram (@SweetlyShan) and there are a few videos up there! 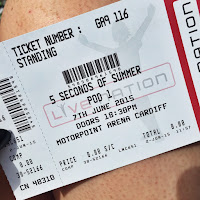 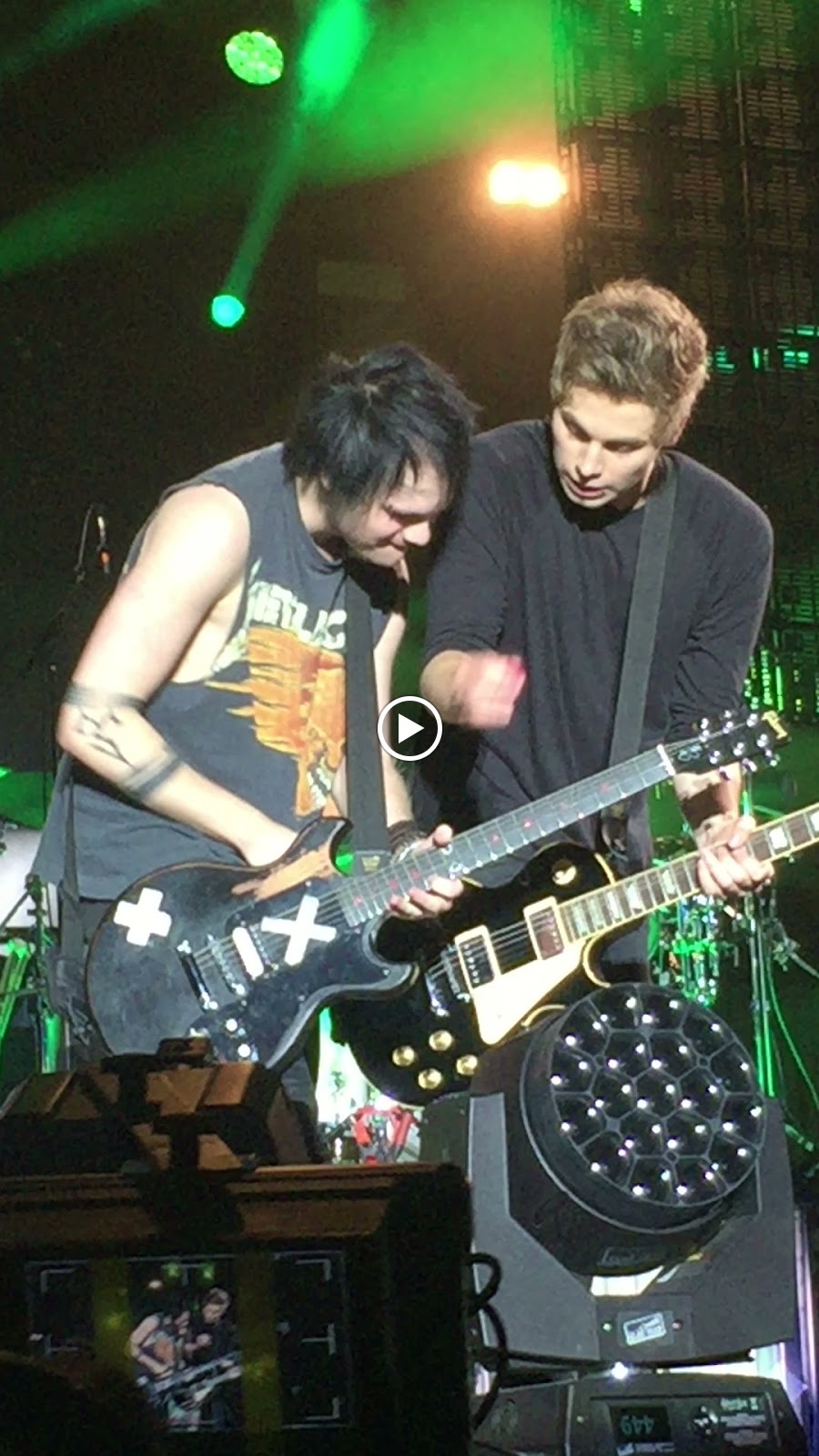 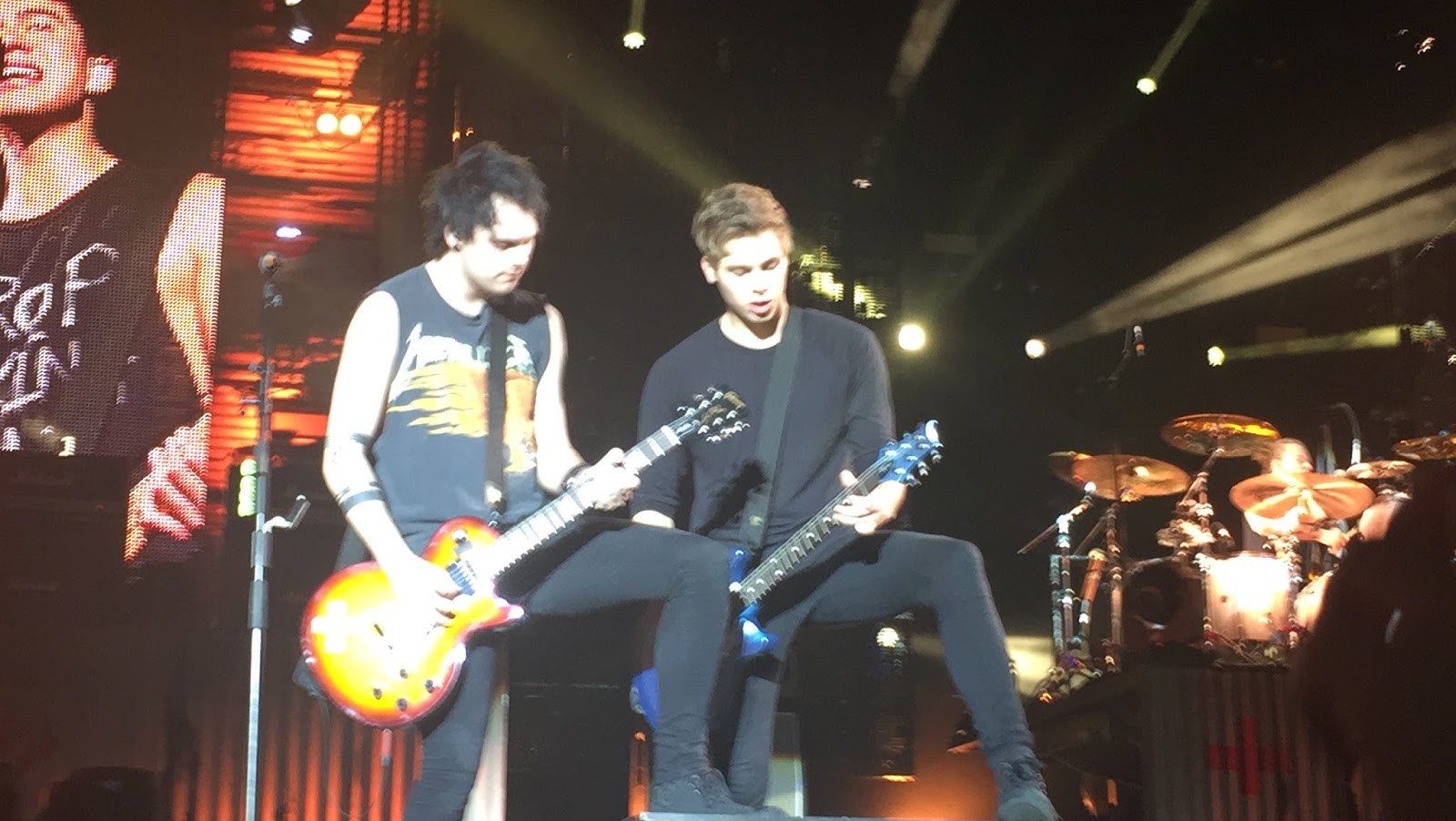 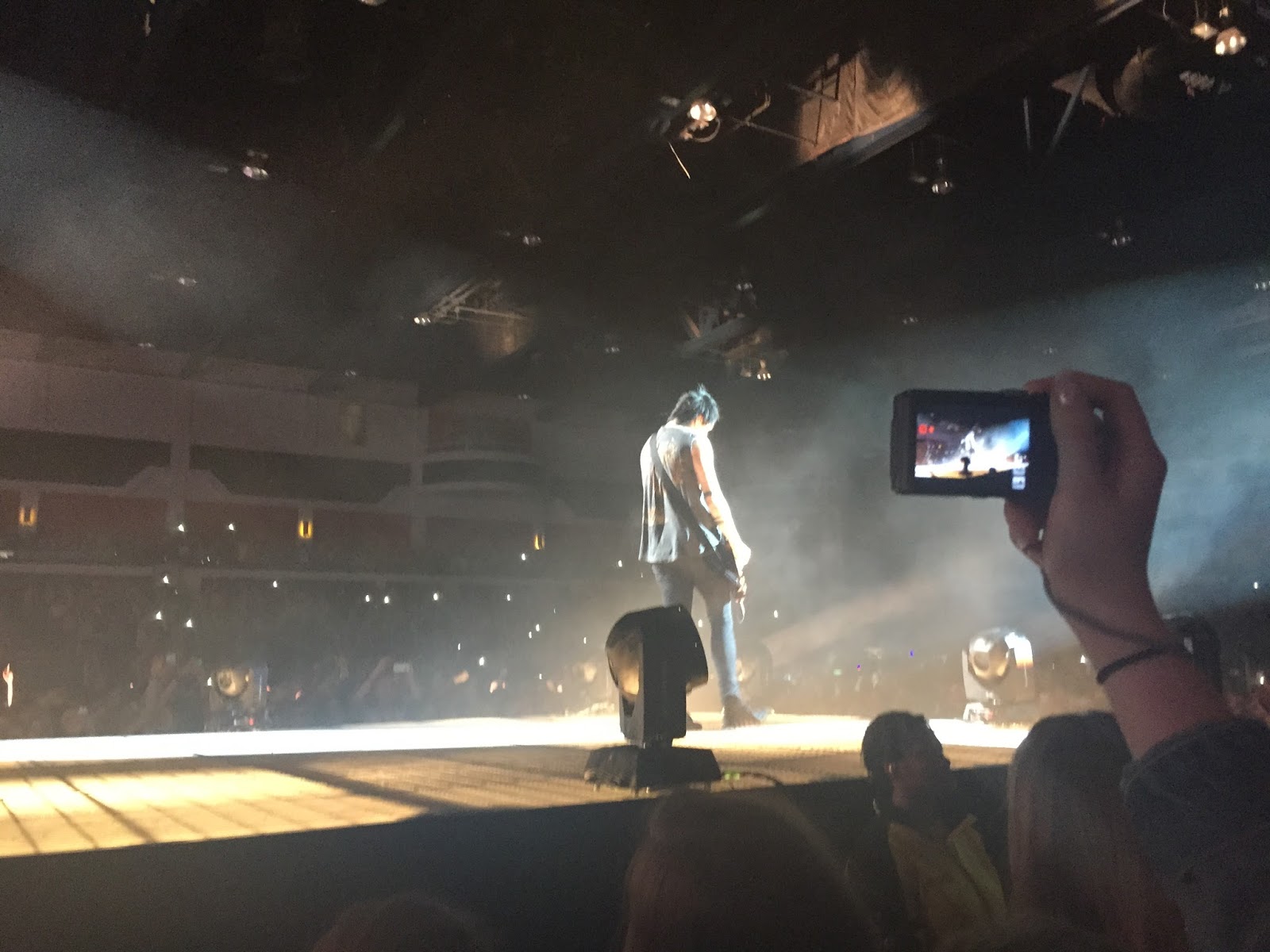 Thanks for Reading guys! Don’t forget to leave me a comment if you went too!

Where To Find 5 Seconds Of Summer;