Anyway, so yesterday I went to a Pirate themed “Surprise” 18th party for one of my closest girl friends. It ended up not being a surprise for certain personal reasons that aren’t relevant to this post for the moment. Anyway, so myself and 2 others went to set up early at 5pm yesterday, all dressed in out pirate costumes! I decided to wear black leggins, a cream blouse with a black waist-coat over it and then borrowed a friends red ribbon to go around my forehead!  I finished off the look with a few Jack Sparrow inspired plaits with beads and a foam sword I stole from my brother! 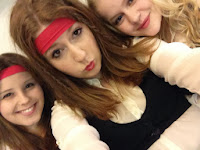 So they party was ALOT of fun! One of the best parties I’ve ever been to but then again the birthday girl is known for throwing amazing parties! It was great to see a few people I hadn’t seen in months (again!) and to just slip back into being the way we were before, which was nice! As a teenager I tend to over think everything, as anyone who knows me will tell you…so I was kinda nervous about seeing a few people but I didn’t really need to worry because everything was amazing! Which is the second time this month already that I’ve learned I shouldn’t worry about such silly social situations! I don’t really drink, although I said this week I was going to drink at this party, I decided against it! Everyone else around me was drinking although I always feel comfortable not drinking and I know I can have a laugh with everyone without having to drink!
For those who don’t know me (basically anyone outside of the select few of my close friends I trust to read my blog) I’m not the most confident of people, which I have mentioned before. But last night was particulary different for me and one of my bestfriends who I have been to every party over the last year with was away and couldn’t make it to the party. It was an odd feeling as that particular group of people I have always been with her whenever I’ve seen them, and a few of them we met together so it felt strange! It was very different being this confident sociable person (which I’m not normally around people I don’t know well) without her there because we normally motivate eachother to be confident, so it was tough not having her there to have a laugh with, however I learened that I don’t need anyone else to make me confident and that I can do it by myself now (and this has been a long time coming but I’m proud of myself for getting here eventually!). And as much as I missed her company, I still had an amazing time with my other best friend (we NEVER seem to be able to do things as the three of us, there’s always one missing!) was with me and she, bless her heart, danced and laughed even though she’s on crutches at the moment! It was so much fun with glow stick raves and so many laughs that it makes me want to do it all over again!

There was way to much that happened for me to write it all up for you guys but I just wanted to share the story in some form! This is going to be a busy month for me and so far its been good! I hope it contiunes!
For those who don’t know myself and Rhi are going to see one of my favourtie bands 5 Seconds of Summer in London in about 8 days time!!

Thanks for reading beautiful humans!