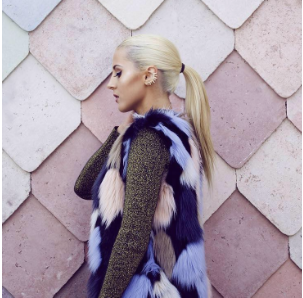 A few weeks back I was invited to attend a press event in London’s Hippodrome Casino in Leicester Square for up coming artist, Rebecca James. After attending this event and hearing Rebecca sing, I thought I couldn’t not feature her on this blog as her talent is truly incredible!

The 20-year-old Cardiff girl is one I would definitely recommend keeping an eye on as we steam forward into 2016. Already James has been featured on Digital Spy, BBC1Xtra and Flavour Magazine just to name a few, and has also performed on the Wembley Arena stage! James’ music is a hybrid of Pop and Urban, which results in powerful lyrics and catchy beats.

Rebecca kicked off her performance with the track “1000 Roses” and instantly demonstrated her spectacular vocal range with this beautifully arranged track. She followed up with a few of her other tracks, each one beautiful in its own way, and perfectly sculpted to Rebecca‘s voice. Each guest was given an MP3 player & SD card at the end of the event with all the songs on and I can honestly say after listening to them all a few times, there isn’t a song I dislike.

For me, the most powerful performance of the night was her song “Soldier” in which she took to the piano before explaining a brief story of how she was bullied as a teenager, and how her experiences inspired her to write the ballad.  A song which I think a lot of people can relate to (I know I do) and I’m sure I can’t be the first to say the endearing track gave me goosebumps.

A comparison that I never thought I’d make, is Ariana Grande purely because of the talent and vocal range Grande possess makes it hard for anyone to compete, but after seeing James perform, I can honestly say I can see her giving Ariana a run for her money!

Rebecca’s Mixtape is due to be released on Monday 23rd November! It also features the talented V Simmons on the track “On My Way” who also performed alongside Rebecca at the press launch. I’ll leave the video for this track below for you to check out.

Thanks for reading guys,
– Shan