So currently I’m sitting at home with my headphones in listening to Mayday Parade as my family eats dinner behind me. I went out for a meal to a pub restaurant with my friends after work so I’m STUFFED!!! It was a good evening but I should probably fill you in on yesterday night first!
Well last night was friday night, and there was a new Youth group kinda thing starting in this Christian place where I live. So me and a few friends decided to go! It was so much fun! We played thing thing called Extreme Frisbee…umm…yeah. How do I explain that? Well for those who don’t know, extreme frisbee is basically frisbee but with netball rules! Turns out I’m not that bad at it! My team won! (Although I think that may have been a result of the extremely tall and amazing guys we had…) We also played dodgeball….which, as it turns out, I cannot play. My team was called “Team Cat” because we had purple face-paint on (whiskers and a nose! Mine was a heart ♥) 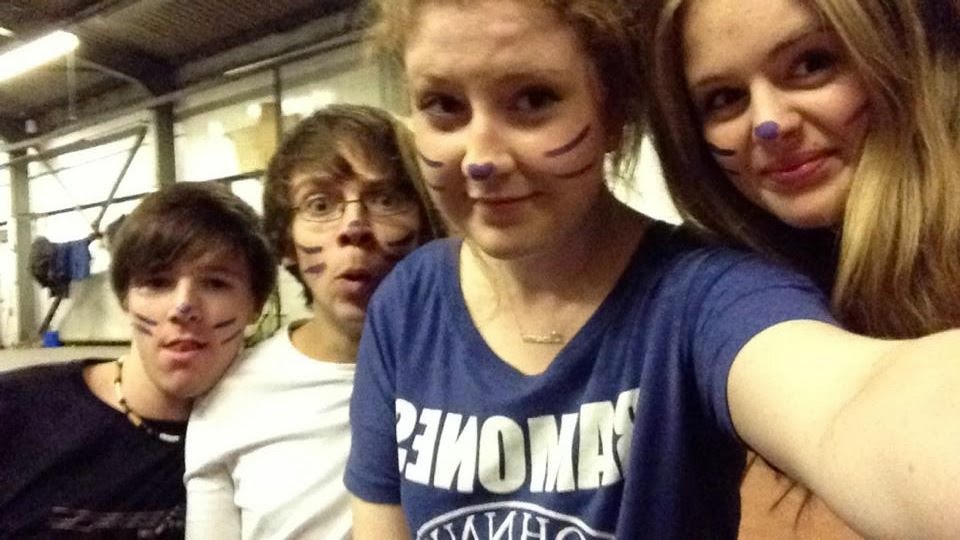 I had a really good time with some people I hadn’t seen in quite a few months and turns out,
I do over think things WAY to much! (I’m not the most confident of people if you’d haven’t already guessed…)

Then today I had work which was fun as my friends came in to vistit me! After that we went for food and if you know me and my friends, it’s impossible for us to go out for food without “peeing ourselves laughing” (which apparently I should stop saying as I never actually pee myself… that lead onto a strange conversation but I’ll spare you of that!) It also appears impossible to go out and eat without Instagraming our food… After that I went back to my extremely blonde bestfriend Rhi’s house to help her sort out her house which is being done out! (looks amazing Rhibee!♥)
And that is where I am now…..still sitting at my dinning table listening to Mayday Parade whilst the smell of food behind me is making me feel slightly queasy….

Since you’ve gone to reading all of this for me (which I love you for♥) Do you think you could do one more thing for me? Follow Rhianna’s blog! She’s amazing and I promise you’ll LOVEher! http://blondeblog.co.uk/