My beautiful people hello there! 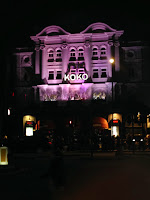 So… The last week has been absoluely amazing! For those of you who have read my previous blogs, you’ll now that this week I was lucky enough to go to London to see one of my favourite bands!
5 Seconds of Summer were absolutly incrediable, it was the second time seeing them (first time was with 1D about 8 months ago) and I can say that they have improved so much not only in their music but in their stage presence. I am so proud of my 4 small town Australian boys, they are so young and have achieved so much (with the youngest memeber Luke having only just turned 17!)
Anyway, so after my shift at work on Tuesday I headed over to Rhi’s where I stayed over night ready to leave early for London on Wednesday morning. So by the time we left town it was around 10am. It took us 3 hours to drive up to Hounslow where we parked and caught the tube into central London and visited the Tate Gallery! I’m not the most seasoned London traveler so the tube was scarily although after a while I got used to it and thoroughly enjoyed the experience! I’ve never ben to the Tate before so that was a really good unexpected trip which was very usefull for my English and Art A-Levels! 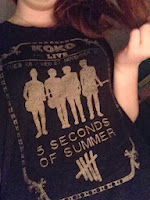 After that we caught the tube again to Leicester Square. This is when it hit me, I was in London, the capital! Not only was I in London, I was in Leicester Square seeing all the Christmas lights but also, I was going to be seeing my favoutite band LIVE! I’m going to be honest, I’ve been counting down to this gig since July, and I didn’t think I’d get there!(Rhi’s dad was kind enough to drive us up and back and take us all the way to the gig, which i’m so grateful for!) So when sitting in an overly posh Burger King overlooking Leicester Square, It kinda hit me I was there! I was feeling kinda ill, I don’t know if any of you get this, and I know I shouldn’t really whine and I’m not, but when I don’t eat for over 4 hours, I start to feel faint and everything starts spinning!(I know I’m fat but I like my food okaay!) So yeah, then we went to queue outside KOKO for about an hour and a half! We also met/bumped into/ fan-girled over- Calum (the bassist’s) mother! Myself and Rhi were shocked and Rhi kinda freaked because she touched her (ahahahaha) aw love her! We went into the venue first and bought T-Shirts which had KOKO and the date written on them! They were limited edition so it would have been rude not to!

SO! This was it, 5SOS gig! They were amazing, as I’ve already said, but so were their support, Young Kato! I am now obsessed with one of their songs Break Out (watch the video on the right, such a good band!)
I was also lucky enough to meet the guys after the gig and had a photo with the drummer, such a nice guy!

So then 5SOS came on and I nearly cried. I spent the entire set just watching Luke, if you didn’t know, I’m the worlds biggest Luke girl. So I came to conclusion he is actually perfect and watching him have the time of his life up on stage just made me smile and made me so happy! They performed all my favourite (most of their songs!!) apart from their newest single which made me sad however they made up for it with Green Light! We also heard (from Rhi’s sister) that Harry Styles was at the gig and at the very end, we saw his little curly locks at the side of the stage door! Security also confirmed it at the KOKO! So that was another pretty coo detail!

SO THIS IS THE BEST NEWS OF THIS BLOG! I’ve just come home from another youth meeting which I will write about another time. BUT the big announcement is…..
2 Days after seeing them in London, I MANAGED TO GET TICKETS TO SEE THEM AGAIN IN OXFORD IN FEBRUARY! This time we have 3 tickets so Laura can come aswell which I’m so happy about!! I love this band so much and can’t wait to see them again!

So thanks for reading guys, I know this has been quite a long post but I hope you understand my excitement!