You know you that amazing feeling when you’re walking through a concert crowd and the floor shakes, and you feel the bass in your chest, your ears are numb and you just get that feeling of genuine content? That’s how I felt last night at the co-headline tour for guitar led pop-punk bands All Time Low and You Me At Six. I’ve been to many gigs before, of bands that I claim to be my favourite, but last night took it to a completely new level.  I know I’m slightly biased, as a review of my favourite bands are going to be so much more praising than others… But from the reaction from those around me, including friends I made at the gig, they all agree that the whole night was incredible… I suppose I should go I from the start, bare with; this may be a long post….

The Support, Walk The Moon, I had checked out before the show, although was not expecting them to be as good as they were! They successfully warmed up the crowed by opening up their set with “The Circle Of Life” from the Lion King, which was a tad confusing but nevertheless entertaining. I take my hat off to the lead singer, he is very talented in moving his hips and dancing around the stage, constantly interacting with the audience! I felt their music fit perfectly with the tastes of the audience, and from the reaction I saw, the crowd agreed! Walk The Moon performed their new single “Shut Up & Dance” which is up on VEVO now,(click here for mobile viewers) and you can watch the video below,(watch with caution, It’s been stuck in my head/on repeat all morning!)

All in all I was very impressed with their 20 minute set, which defiantly set a high standard already for the rest of the night. I did take footage of my own from the gig however with the nature of a crowd like that it’s quite shaky, I’ll try and insert a clip below, if not I’ll post it to my YouTube soon and link it here later!

After a short interval for set change, a trailer for All Time Low came on the large LED wall at the back on the stage. All Time Low opened with their massive hit “Love Like A War” which then led straight into “Lost in Stereo“. Now,  All Time Low have been one of if not my all time (pardon the pun)
favourite band for the last 5/6 years… seeing Alex Gaskarth and Jack
Barakat bounding around stage soaking up the energy from the crowd and
clearly enjoying themselves just as my as we were, was just an indescribable feeling for someone like me, who’s loved the band since I was 13. And yes, for those people wondering, Alex Gaskarth is just as beautiful in the flesh… Jack spent most of his time with his middle finger in the air or his bare chest on show….before stripping down to his boxers at the end of their set… which to no surprise made the audience go wild, the boys just as much as the girls! There was an awful lot of bad language and inappropriate jokes made although fans for the band would already know that’s just them anyway! They encouraged mosh pits although that isn’t really my thing so I tried to ignore the crowd surfers an focus on being in the moment. During their performance of “Time-Bomb” Alex and Jack picked a handful of fans out from the crowd to join them onstage to help them sing the song. They appeared to be having the time of their lives, and to be honest, I was very very jealous! The band performed all of their biggest hits, including their latest single “Something’s Gotta Give” from their new record “Future Hearts” which is released in the UK 7th April this year. You can watch the music video for Something’s Gotta Give below (or here). Cardiff was the first audience in the world to see this new track performed live, and also the first show All Time Low had done in 2015!

They sound as amazing live as they do on their records, if not better! I’ve also created a setlist for All Time Low’s set, which you can see below also!
At the end of this post I’ll publish a few photos I took of both bands if any of you are interested!

After another short interval, in which we used to get out of the every growing, and squashed, crowd, You Me At Six came on, opening with their massive hit “Room To Breathe”. Frontman, Josh Franceschi, informed us a few songs into their set that he was actually performing with a broken ankle! He said it was between cancelling the whole tour or him performing the 5 night tour with the pain, which is what he did, and intends to continue doing! And I take my hat off to the guy, he and the rest of the band put on an incredible performance and from he way he was jumping around the stage you would never have known! I just also have to mention the amazing camera angles for the screens going on during their set, if you guys have read my blog for a while you’ll know Rhi, who’s a major tech junkie, attended with me and even she was impressed! That along with the pyrotechnics which definitely added to the awe.

Like All Time Low, You Me At Six sang all their most popular songs, including my personal favourite “Reckless” which had the crowd roaring and screaming the lyrics back to the band. That’s one thing I will say about the crowd at last nights gig, an equal split of genders yet a variety of ages, however they weren’t quite as rough as I was expecting, instead of pushing
aggressively towards the front, as I usually experience in standing
gigs, they just stood (or more jumped)
enjoying the music, with the occasional miniature mosh pit… but they also sang back every song to both bands giving them the energy to bounce back off. As I said we did leave the centre of the crowd for You Me At Six’s set although the view from the back was perhaps more overwhelming, as you could appreciate the full stage set up properly!
You can watch the bands opening track, “Room To Breathe” below (or here) and see their setlist I created for this UK tour below too.

For those wondering, the support act started at 7pm, an hour after doors opened, and the whole concert was over around 11pm. Half of this blog was written on the train on the way home at 00:20am as I was paranoid I’m going to forget half of this and want to document it ASAP to capture the true feelings having just coming out of the concert! All in all, it was a very enjoyable night, and one I will remember forever! A mixture of the phenomenal stage presence and constant interaction with the crowd demonstrated by all three bands, the obvious fact that they performed some of my all time favourite songs, and the atmosphere in the room all amounted to it being one of, if not the best concert I’ve ever been to. (and possibly the fact that I breifly met two of the All Time Low guys…eep) I think also the fact that it was the first show of this tour that added to the specialty of it, for audience and performers. 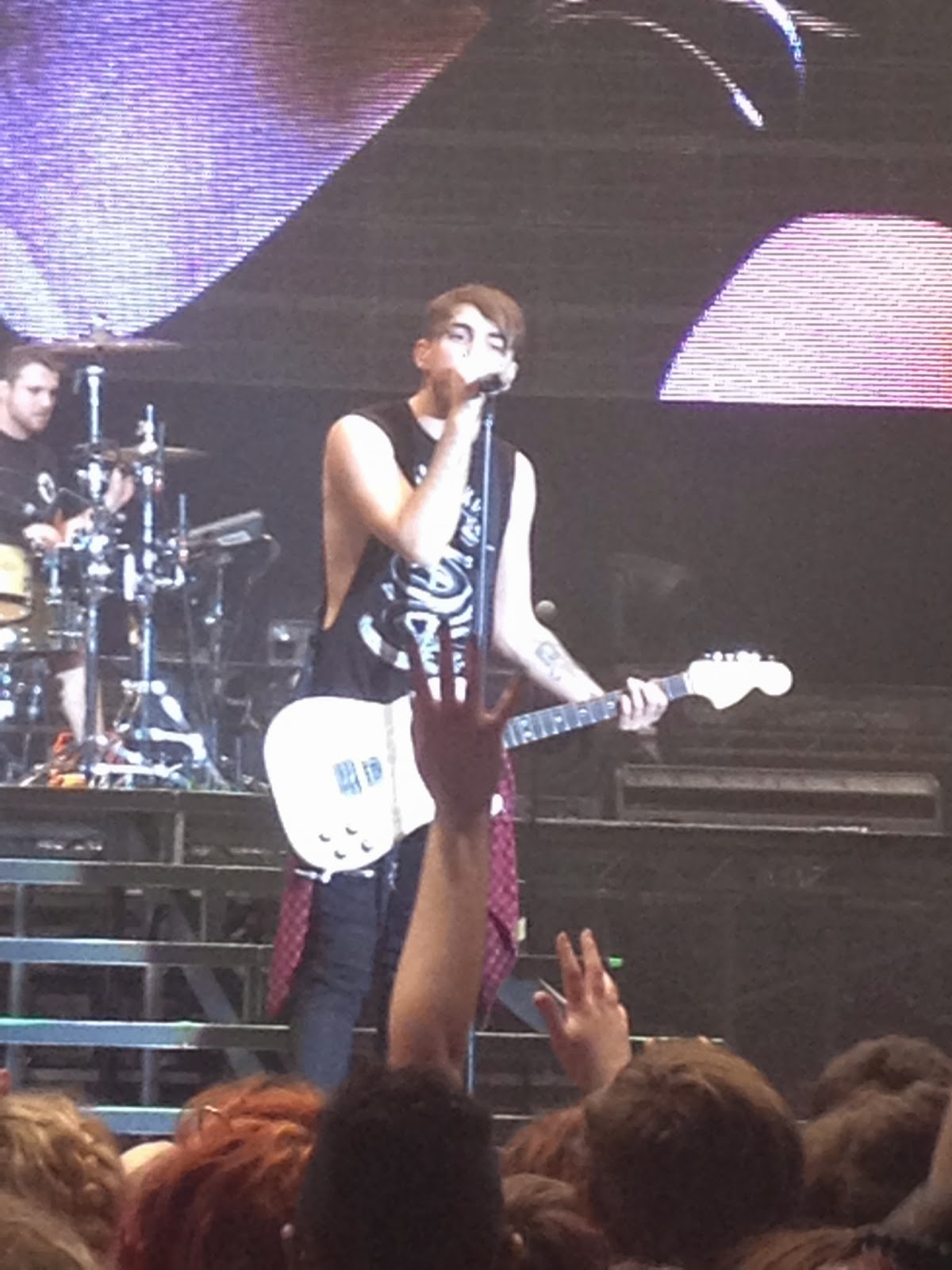 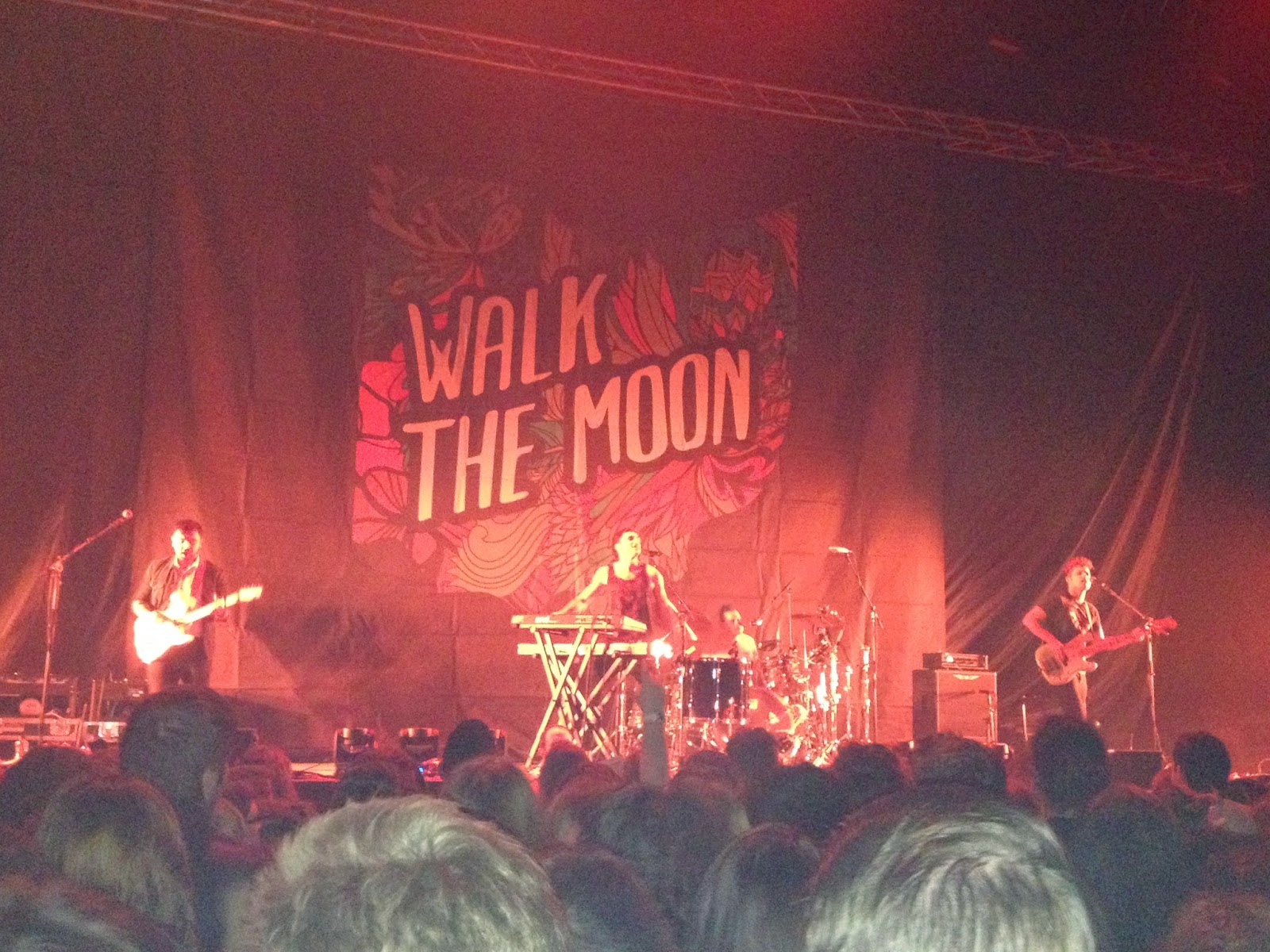 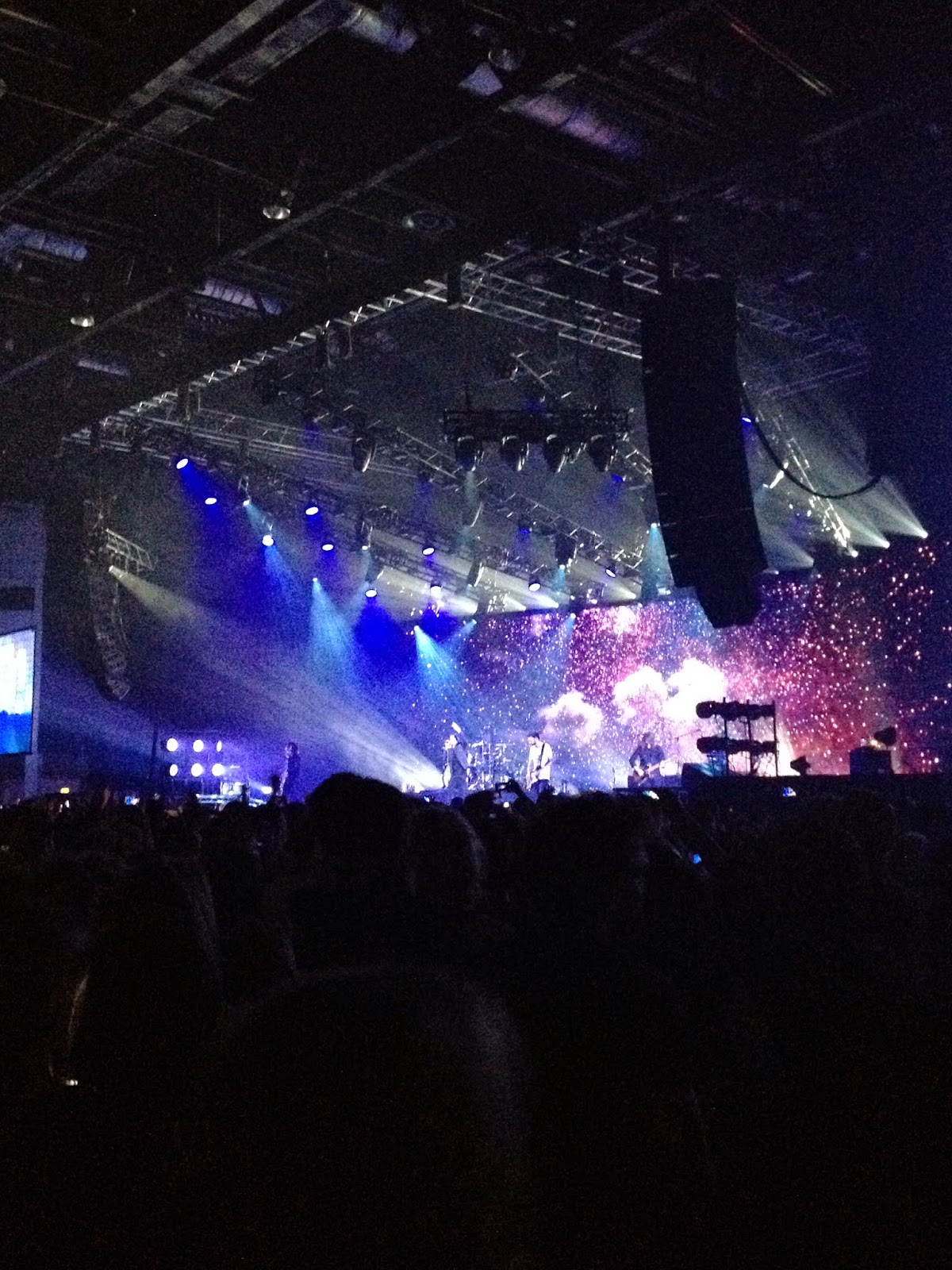 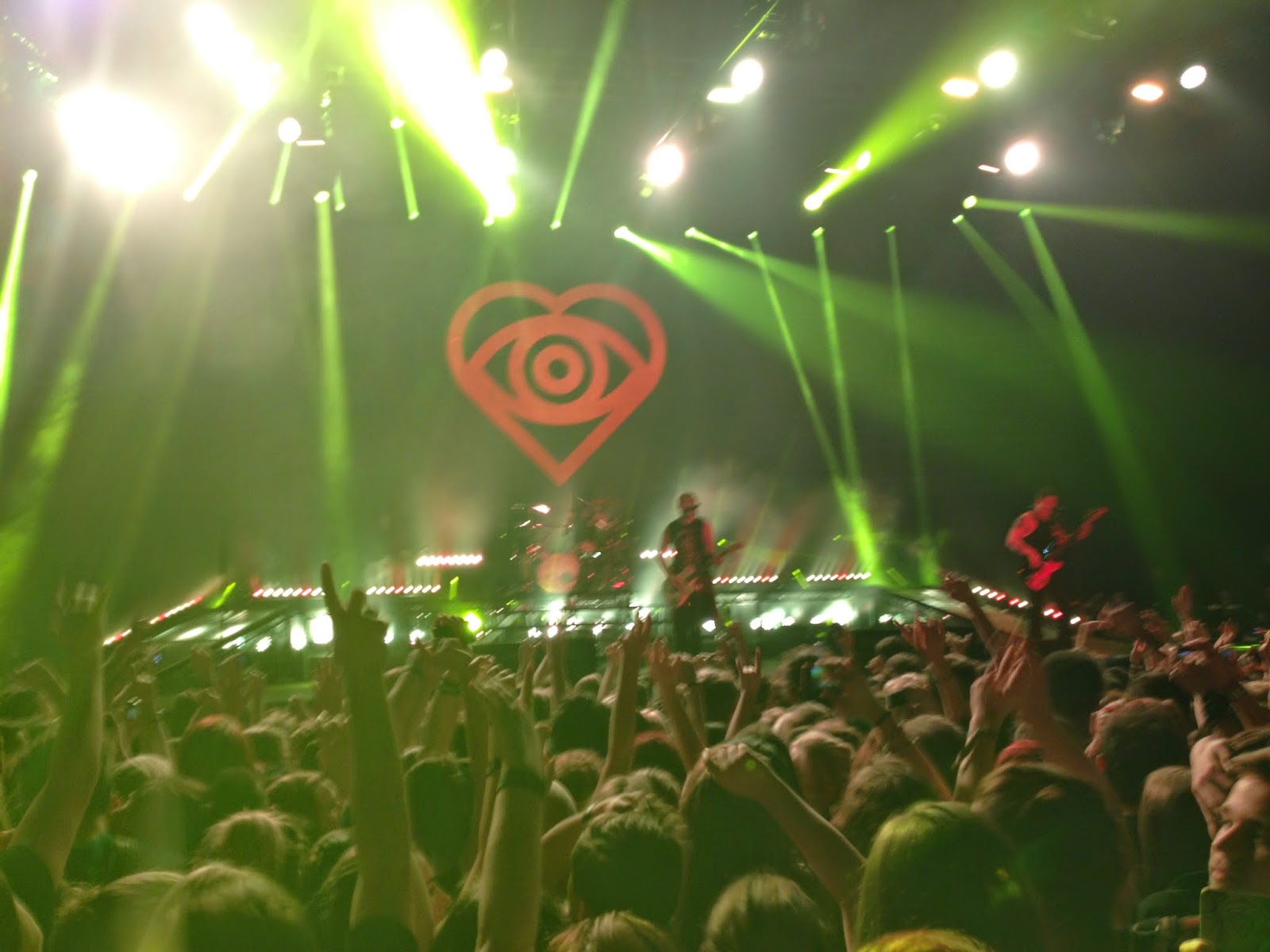 As I said I would do, here are some of the photo’s I took at the concert, not many or of any amazing
quality, but I was focusing on enjoying the concert more than taking photos.

Thank you for reading, I hope you enjoyed this little concert review, I had a blast last night and would definitely encourage anyone to go and see both these bands live! The tour kicked off last night so if you do want to see them before the tour ends on Saturday, there are still tickets available for other UK venues.

Where To Find All Time Low;

Where To Find You Me At Six;

Where To Find Walk The Moon;